Fort Madison, with an estimated population of over 11,000, is located along the Mississippi River in the southeast corner of Iowa. Situated between bluffs along one of the widest portions of the river, it shares the County Seat with Keokuk, making Lee County the only county in Iowa with two seats of government.

Fort Osage - Near what is now Kansas City, MO 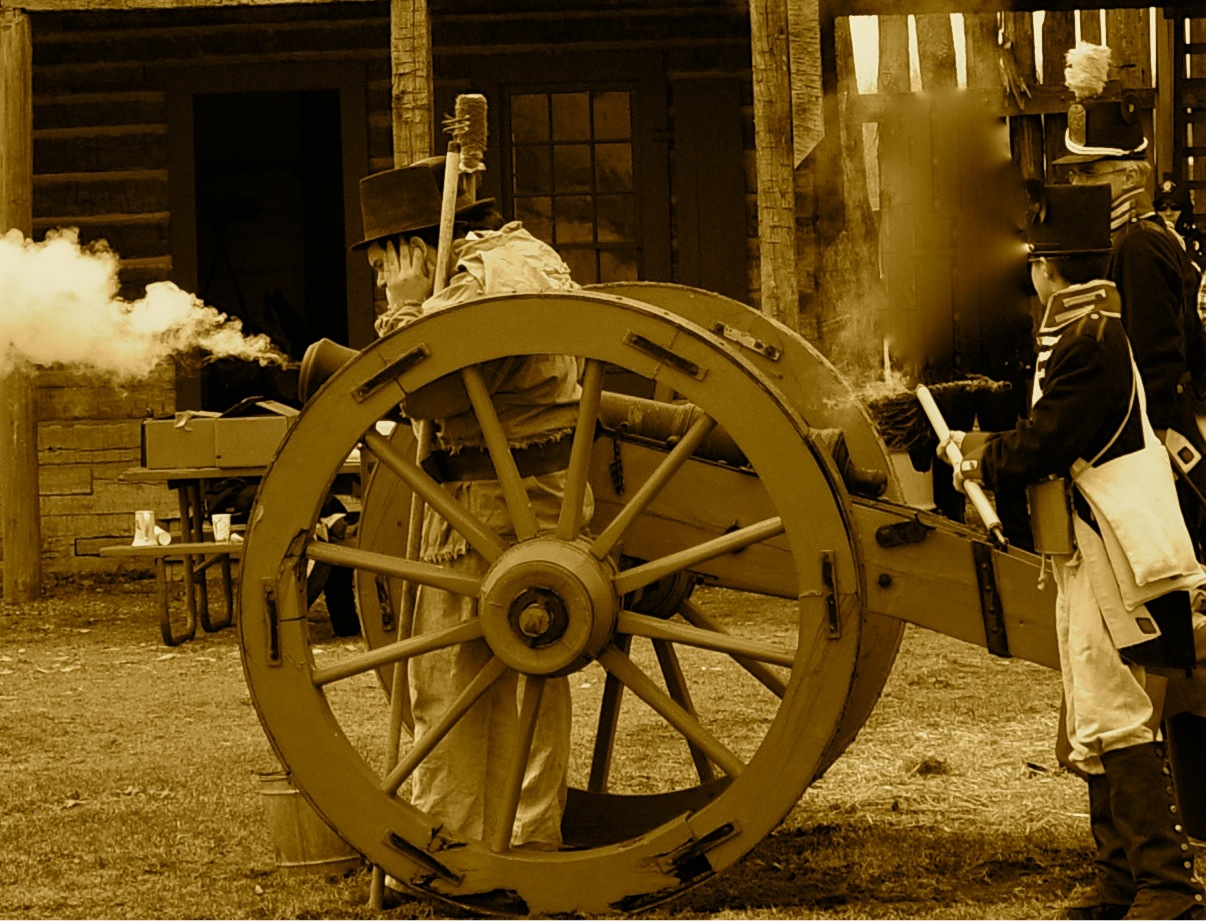 A disputed 1804 treaty with the Sauk and affiliated tribes led to the U.S. claiming control over western Illinois and parts of what is now Iowa. In order to secure their hold, the U.S. Army constructed posts near the mouths of the major Mississippi & Missouri River Tributaries. The 1st Infantry Regiment of the US Army were dispatched to the mouth of the Des Moines River, considered a major trading route to the interior of the Wisconsin Territory, long before this area was to become the state of Iowa. Not finding suitable land near the mouth of the Des Moines River, the expedition considered land near a native village called Quashquame, located at the head of the Des Moines Rapids. These major rapids created a choke point on trade and transportation on the Upper Mississippi. The rapids were located below Montrose, Iowa and are no longer in existence due to the dredging and damming of the modern day river. The Army settled on a location several miles upstream at what is now the City of Fort Madison.

First named Fort Belle View, the name was shortly changed to Fort Madison, in honor of the 4th President of the United States, James Madison. The outpost location proved to be a poor choice. It was ill situated at the base of a bluff near a deep ravine from which native forces could safely fire at the fort. Trade disputes led to resentment among the area natives, especially the Sauk Tribe. They considered the 1804 treaty invalid & felt the fort threatened established trading networks. Native Americans also considered the trade goods offered at the fort to be inferior compared to goods traded by France & Great Britain. Blackhawk lamented over the new fort, and disparaged its construction in his autobiography:

"A number of people immediately went down to see what was going on, myself among them. On our arrival we found they were building a fort. The soldiers were busily engaged in
cutting timber,  and I observed that they took their arms with them when they went
into the woods. The whole party   acted as they would do in an enemy's country. The chiefs
held a council with the officers, or   head men  of the party, which I did not attend, but
understood from them that the war chief had     said that they   were building homes for a trader
who was coming there to live, and would sell us     goods very cheap,   and the soldiers were to remain
to keep him company. We were pleased at this information and   hoped that it was all true, but we
were not so credulous as to believe that all these buildings were   intended merely for the
accommodations of a trader. Being distrustful of their intentions, we were   anxious for them
to leave off building and go back down river."

Almost from the beginning, the fort was attacked by the Sauk and other tribes. U.S. troops were harassed when they left the fort, and in April 1809 an attempted storming of the fort was stopped only by threat of cannon fire. During its existence, several improvements were made to the fort from reinforcing the stockade, making the stockade higher, extending the fort to a nearby bluff and constructing additional blockhouses outside the stockade. These improvements could not compensate for the poor location and it was again attacked in March 1812, and again during a coordinated siege that September. This siege was intense, and the fort was nearly overrun. Significant damage was sustained to fort-related buildings. The attack was only stopped when cannon fire destroyed a fortified Indian position. Blackhawk claimed to have participated in the siege, boasting of personally shooting down the fort's flag.

As the War of 1812 expanded to the frontier, the British-allied Sauk Indians and other tribes began a determined campaign to eradicate the Americans and reclaim control of the upper Mississippi. Beginning in July 1813, intense attacks on troops outside the fort led to another siege. Conditions were so dangerous that the bodies of soldiers killed outside the fort could not be recovered, and troops could not leave the fort to forage for supplies. Outbuildings were intentionally burned by the Army to prevent them from falling into Indian hands. After weeks of paralyzing siege, the Army finally abandoned the post, burning it as they evacuated. They retreated in the dark using a trench that led to the river, where they escaped in boats. The date of the abandonment is unknown, as most military correspondence from this period of time are missing. Blackhawk observed the ruins soon after:

"We started in canoes, and descended the Mississippi, until we arrived near the place where Fort Madison had stood. It had been abandoned and burned by  the whites, and nothing remained but the chimneys. We were pleased to see the white people had retired from the country."

Early settlers coming to homestead, built their homes near the ruins. The town that grew up around them was named for the fort. A large monument was erected in the early 20th century at the fort location. Archaeological excavations in the parking lot of the Sheaffer Pen factory in 1965 exposed the central blockhouse of the fort, as well as the foundations of the officers' quarters. The site was listed on the National Register of Historic Places in 1973 & a replica fort was built in Riverview Park. Most of the labor force that constructed the period specific replica was supplied by volunteer inmates from the nearby Iowa State Penitentiary. The fort site is now the subject of preservation efforts. After the Sheaffer Pen Factory was closed in 2007, the site was sold to developers. Arguing that Fort Madison is "Iowa's most important historical site" preservationists want to convert the parking lot into a memorial park dedicated to soldiers killed at the fort. So far, no agreement has been reached for its preservation.

Home to the Iowa Maximum Security Men's Penitentiary circa 1839, It is now home to the oldest & newest prisons west of the Mississippi River. There is a new, state-of-the-art facility located north of town, where prisoners were relocated to August 1st, of 2015. Marking the first time in over 175 years, that the "Old Fort" isn't guarding inmates. Travelers along the Great River Road, following the river from its source in Minnesota to the Gulf of Mexico, can view this massive edifice and marvel at the old quarried stone walls, not only laid by prison laborers, but mined by them from the local hills. The Historic Iowa State Penitentiary, Inc. is a grassroots initiative supported by the city of Fort Madison. The groups goal is to secure a future for the oldest federal and state run institution. The prison was commissioned in 1839, 7 years before Iowa's statehood.

Adding to the history of Fort Madison is Sheaffer Pen, a company manufacturing unique fountain pens designed & patented by Walter A. Sheaffer a local jeweler. Sheaffer Pens were produced here from 1913 until 2007, earning Fort Madison the nickname of Pen City.

The Downtown Riverfront District is home to an eclectic mix of shops, services and restaurants. It is home to Riverview Park where the Old Fort Madison Replica stands and is host to Fort Madison's newest festival, Riverfest! Old Settlers & Central Park bookend Fort Madison's Park-to-Park Residential Historic District, home to numerous homes and structures that are listed on The National Park Service Register of Historic Places, The district, which is easily walkable is a showcase of Victorian Era Architecture.

Amtrak's Southwest Chief crosses the Mississippi at Fort Madison, making its way from Los Angeles to Chicago on the world's longest swing-span double decker bridge, the only remaining example of this type of structure on the Mississippi River. It opens its gates to barges and riverboats moving commerce and passengers along the major waterway.

The Santa Fe Depot Museum, home to the North Lee County Historical Society, located in Riverview Park, showcase the heritage & culture of this midwest community. The Tri-State Rodeo has its home here in Fort Madison, bringing the wild west to life in Fort Madison every September. Fort Madison is also home to Iowa's oldest hispanic community, hosting the annual Mexican Fiesta, a celebration that has been part of the community for over 90 years. A strong midwestern community with its history in railroads, industry & commerce and a bright future in green energy. From brick paved streets to historic architecture, scenic parks & river views, Fort Madison the place where Iowa began.